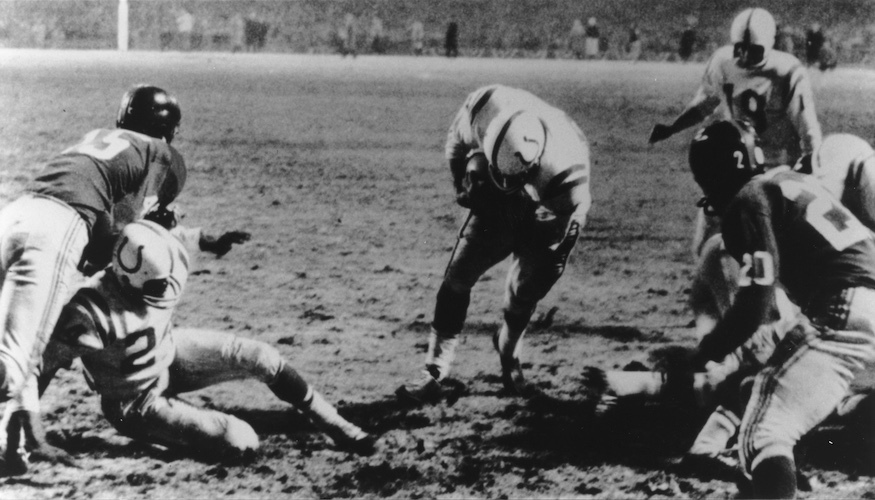 The Greatest Game Ever Played

Kenosha’s Alan Ameche finished with 59 rushing yards on 14 carries with two touchdowns in leading the Baltimore Colts to the 1958 NFL Championship.

On this date in 1958, Kenosha’s Alan Ameche scored the clinching touchdown in what has become known as “the greatest game ever played.”

Ameche’s 1-yard plunge with 6 minutes and 45 seconds left in overtime handed the Baltimore Colts a 23-17 win over the New York Giants in the NFL Championship game before 64,185 at Yankee Stadium.

The Bradford graduate was instrumental on the victorious drive in the first NFL game decided in sudden-death overtime.

The fullback from Wisconsin snared an 8-yard pass on a 3rd-and-8 and later got the Colts to the red zone with a 22-yard run. Ameche also had a 1-yard run inside the 10 before crossing the goal line.

Ameche finished with 59 rushing yards on 14 carries with two touchdowns. The 1954 Heisman Trophy winner also had three catches for 14 yards as the Colts won their first championship.

This epic back-and-forth battle, which featured 17 future Hall-of-Famers, ushered the NFL into its modern era where it became the country’s most popular league.

The nationally-televised game captured the attention of the country so much it soon became known as the “greatest game ever played.”

That has been confirmed in many polls and surveys over the years with the latest coming in a nationwide poll of 66 media members in 2019.