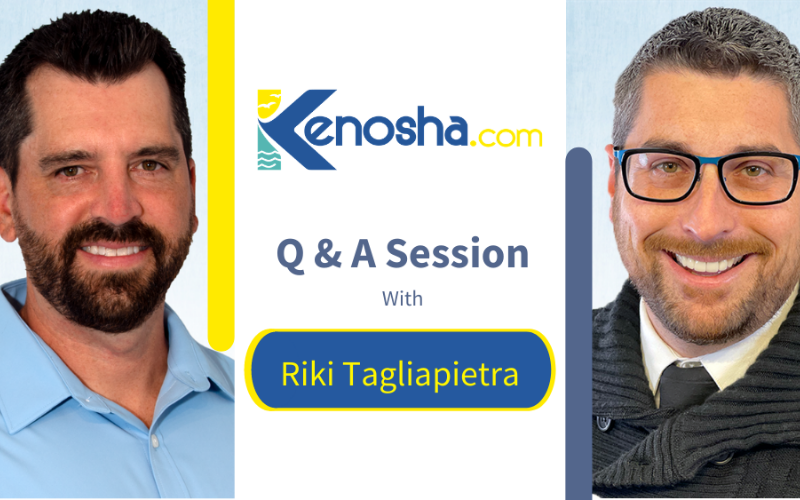 Getting to Know Riki Tagliapietra

Riki Tagliapietra is the newest member of the rapidly growing Kenosha.com team.

Tagliapietra arrives at Kenosha.com following a long, successful journey in marketing and operations in the local restaurant industry. Kenosha.com caught up with the 35-year-old Kenosha native to learn more about his background and journey that led him to Kenosha.com.

Kenosha.com: Congratulations on becoming Kenosha.com‘s Director of Digital Success. As a longtime member of the local Grease & Honey Restaurant Group, what excites you most about your new position?

Riki Tagliapietra: I’m excited for a new mountain top from which I get to yell about how great this city is. I’ve loved using my talents to promote and build up the Grease & Honey team, and I’m excited to be able to apply everything I’ve learned towards the broader scope of promoting all of Kenosha’s incredible people and businesses.

Kenosha.com: How did your path lead you to Kenosha.com?

RT: I’ve been involved in public-facing roles in Kenosha since I could get a work permit. I spent my younger years at Kenosha Ice Arena, Southside Piggly Wiggly (RIP) and Common Grounds. I then went to work for Kenosha Hospital as Emergency Room Security which was, by far, the most interesting few years of my professional life.

Kenosha.com: What was your biggest takeaway from working in the ER?

RT: I spent a lot of time with Kenosha Police officers who inspired me to follow a criminal justice path. I attended Gateway Technical College’s amazing criminal justice program and eventually made it to the top of the application process with the City of Kenosha. During the final weeks of my interviews, my favorite cafe at the time, The Nook, shut its doors. I did the “logical” thing and bought it.

Kenosha.com: Did this start a new chapter in your career?

RT: I learned a lot during that year. Some good, some bad, but all of it told me I was in love. From there, I joined what would become Grease & Honey Restaurants and spent the last 10 years helping shape an amazing company and changing my community for the better, one dish or drink at a time.

Kenosha.com: What is it you love about Kenosha?

RT: Everything. I know that’s cliche, but it’s true. Like many other people I know, I grew up hating it here. It turns out I just didn’t have my eyes open. Every time I traveled and fell in love with some feature of a faraway place, I came home and saw it here. Once my eyes were opened to the beauty and uniqueness of Kenosha, I was hooked. Ever since then, I’ve never complained about what we don’t have, I’ve focused on building it or attracting it. Kenosha is like no place on earth, and if you’re not in love with it, take a walk along the lakefront with open eyes and an open heart, then call me in the morning.

Kenosha.com: Where are your favorite spots to hang out in Kenosha?

RT: Oh man, this is going to be tough to narrow down. Clearly, I love restaurants and Kenosha boasts so many incredible, locally owned locations. You’ll find me at least one night a week at a Grease & Honey Location, Twisted Cuisine, Superb BBQ, or Captain Mikes and almost every morning at Common Grounds.

Kenosha.com: What do you do when you’re not frequenting local bars and restaurants?

RT: Besides food, my other love is cycling so most of the year you’ll find me on two wheels along the bike path, at the nation’s oldest operating Velodrome or reflecting at Southport Beach. But if I had to pick a favorite place, It’s deep in the trails in Sam Peorio Park, where the rails cross the Pike River. It’s the crossroads between Kenosha’s natural beauty and it’s industrial past, as well as a great place to contemplate its future.

Kenosha.com: What have you learned about Kenosha residents?

RT: They’re the best people on earth. We’re a city of 100,000 that feels like a small community because we make it a point to know our neighbors, be grateful, and work together. I’ve always known this to be true, but in the days following recent destruction I was reminded in the best way that no matter what divides us, we all truly care for one another and our city. I tell the world about our community, over one hundred thousand people that will say “Of course, what can I do?” if you ask them for help. It’s my inspiration every day.

Kenosha.com: You have been actively involved in many different local organizations and were able to represent Kenosha in a roundtable discussion during President Trump’s visit in September. How was that experience?

RT: Well, one thing is for sure, I never thought I would be representing our Kenosha directly to the President of the United States. I think that was the result of quickly realizing that the world’s eyes were on us, and it would be too easy for major networks to miss who we are, while reporting what happened here. I knew someone had to chase these people down and make them see us for who we are, and frankly, there wasn’t time to figure out who it should really be, so I just started making calls and doing interviews. I refused to be led into negativity and did my best to focus attention on the incredible people who live here and turned disaster into art. Our city is so much more than a news story, and I wanted the world to know it.

Kenosha.com: Your last name is tricky to spell and it’s even harder to pronounce. We now know it’s pronounced Talia-Pee-AYE-Tra. What are some of the craziest attempts you’ve heard?

RT: I have zero expectations for anyone to get it right. I try my best to make it less intimidating with a little Italian lesson. The “g” is pronounced just like it would be in “lasagna” and it’s easier to remember if you break it down. In Italian, taglia means cut and pietra means stone. It’s much simpler when translated. It’s hard to pin down the very best mispronunciation, but I think President Trump’s attempt on live national television has to be the most notable. It came out as something resembling “tilapia truck.” Honestly, it’s easier to just call me Riki, or you could make my life by officially referring to me as Mr. T. I’ll keep the gold chains to a minimum.