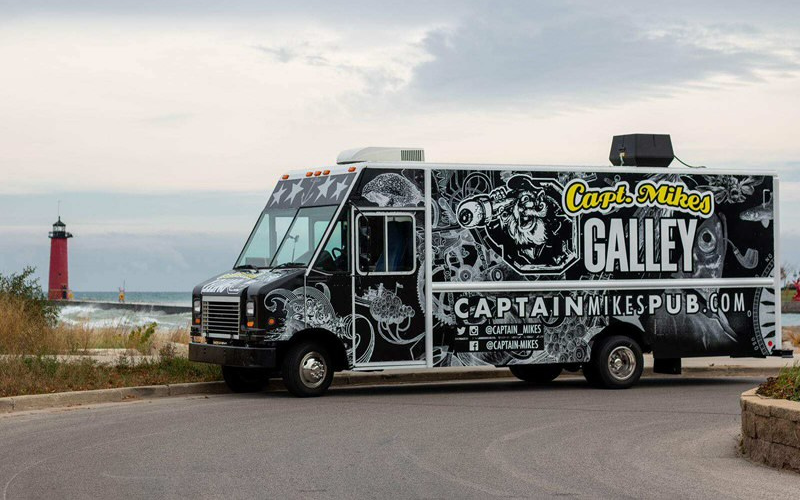 Full Steam Ahead for The Galley

The owners of Captain Mike’s have a new vessel to command.

Jeanette and Michael Kelly can now serve signature burgers, chili-cheese fries and mac and cheese around town on their Galley, a name commonly given to the food preparation area on a ship, train or aircraft.

Or in this case, a food truck.

Michael Kelly, who purchased the local establishment in 2019 with his wife, said they always planned to own and operate such a truck. He said 2020 seemed like the perfect time to make it happen.

“We brought it forward because of everything that happened this year,” said Michael Kelly, adding that the Galley allows them to serve food to folks outside and with minimal contact during the COVID-19 pandemic.

“I think people will feel safe coming out to a food truck,” he said.

He said they purchased the 27-foot-long former coffee truck from someone out of state and completely renovated it. It has a new fire suppression system, fryer, grill and refrigerator.

“The cooks like it because the kitchen’s actually a little bit bigger than Captain Mike’s kitchen,” he said. “It’s an investment in our future.”

He said they’ll offer most of the same menu items as Captain Mike’s, 5118 Sixth Ave., and hopes to cater higher-end events such as weddings and graduations. They’re also open to joining festivals throughout the summer and experimenting with pop-ups.

“It’s Captain Mike’s on wheels,” he said. He tested the truck for the first time on Monday.

“It’s the first time it’s been plugged into the generator so it was nice when I went in and everything fired up as it should,” he said. “It was good, it was fun. A proud day.”

Locals hoping to track the truck’s movements will eventually be able to follow it online at captainmikespub.com.