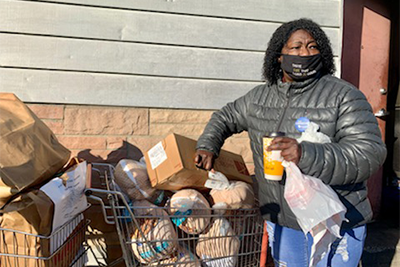 ‘I Love My Community’

Kenosha's Griffin relies on faith to lift others.

“People are struggling and it’s sad,” Griffin, a mother of eight and grandmother to 25.

Griffin and about a dozen supporters loaded boxes filled with eggs, onions, apples and cheese into vehicles for hours at Model Market, 2327 54th St. All wore masks to curb the spread of COVID-19.

“I love my community because they see things that are going on and see where the need is.”

“I love my community because they see things that are going on and see where the need is,” Griffin said. “The community helps. It’s the community that makes God’s Kitchen. There’s a lot of people who support me.”

Her efforts didn’t stop after the boxes of food were dispensed. At noon she offered hundreds of folks free meals of baked chicken, ham, baked beans, mashed potatoes and cabbage. Volunteers and some members of her family helped prepare the meals.

Griffin has been offering free meals near the intersection of 61st Street and 22nd Avenue in Uptown for years. She said God spoke to her after First Step Services closed in 2017. She believes nobody should go hungry in Kenosha.

“You’ve got to have a relationship with God for one, and I got that relationship,” Griffin said “Three years ago when I saw First Step was going to close down — where all the homeless people go — I thought that was terrible. I pray every day. I may skip a few days, but I get back on it.”

Alderman Anthony Kennedy volunteered his time Saturday. He said Griffin is an “instrument of God’s mercy and God’s grace.”

“She’s an amazing person,” Kennedy said. “What she’s doing in this community has an impact on so many levels. I’m glad to help in any way possible. Some people when they feel like they’re on a mission from God, that energy comes cosmically.”

Volunteer Porche Bennett-Bey said the community is behind Griffin.

“Miss Arnetta is a blessing to a lot of people,” Bennett-Bey said. “We stand behind her 100 percent. Everything she has been doing we stand behind her. She gives out hot meals every day — breakfast, lunch and dinner. … She’s out here faithfully.”

“Some people who do it, take pictures and then be gone,” Bennett-Bey said. “She does this every day without pictures. … She deserves all respect.”