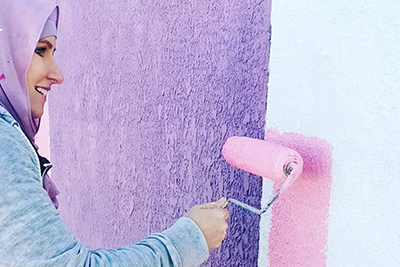 ‘If Colors Could Give Someone a Hug’

‘If Colors Could Give Someone a Hug’

“The pike fish is obviously very significant around here… I, myself, am from the Ojibwe tribe so it’s relevant and it holds a special meaning in my heart.”

“The pike fish is obviously very significant around here,” Brown said. “I, myself, am from the Ojibwe tribe so it’s relevant and it holds a special meaning in my heart.”

Brown, a Kenosha native, moved back here after converting to Islam in Morrocco a few years ago. She now travels the world crafting murals.

“I like to do very abstract, geometric shapes,” said Brown, a Tremper High School graduate. “Generally, when I go to a place I do research on the city beforehand so that way when I leave a piece of my art it’s not something that just represents me and me only. It’s something that the city and the residents can benefit from when they look at it long after I’m gone.”

After the summer’s historic unrest and destruction following the controversial police-involved shooting of Jacob Blake, thousands of area residents began painting messages of love and light on boarded up downtown homes, government buildings and small businesses.

“Everyone reached out to me and said, ‘Oh my gosh, people are painting these boards on all these businesses. You’re a muralist, you’re from here, you have to do this,” Brown, 39, told Kenosha.com. “My inbox was blowing up. People were like, ‘You have to go downtown, you have to paint something, you have to, you have to. If you don’t it’s an injustice.”

“If colors could give someone a hug, that’s what I want this mural to do. It’s a reminder that even when things seem really gray, there’s always a hidden pocket of color tucked around the corner when you least expect it. Keep going. You’ll find exactly what you didn’t know you needed,” she said.

“He explained to us his vision,” Brown recalled. Soon after, Brown and Jabbari began painting the wall.

“It definitely livens up an area that needs a little bit of color,” she said.

She hopes to work with him in the coming months and years.

“Francisco is an incredible idea-generator,” she said. “He loves to bring people together and he’s exactly what Kenosha needs. I would definitely like to work with him again and I really hope he gets the donors and much-needed funding to bring several incredible projects to life.”