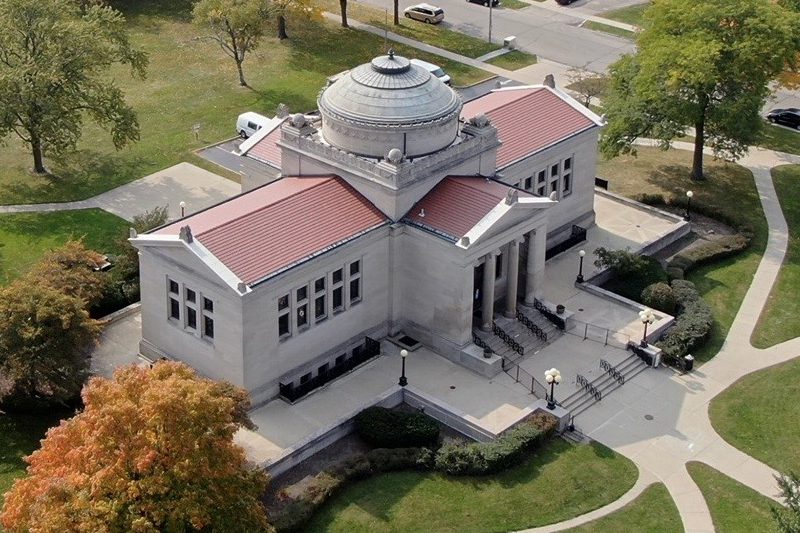 Simmons Memorial Library is located at Seventh Avenue in Library Park in Kenosha.
PHOTO: VIEW FROM ABOVE - WISCONSIN
News

Three days after Kenosha’s Uptown neighborhood was overcome by rioting and civil unrest, a familiar place was safe and sound with its doors wide open.

“You should’ve seen the reaction of people walking in who couldn’t believe we were open,” said Barb Brattin, Director of Kenosha Public Library. “They were so grateful.”

As the highest honor for exemplary service and commitment to its community, Wisconsin Library Association named Kenosha Public Library as its 2020 Library of the Year on Thursday.

At a time when the community needed it the most, Kenosha Public Library offered much-needed assistance as local residents, business owners and volunteers picked up the pieces from the aftermath of the Aug. 23 Jacob Blake shooting.

“You should’ve seen the reaction of people walking in who couldn’t believe we were open. They were so grateful.”

Two of the library’s branches — Uptown and Simmons Memorial in Library Park — are located directly in the path of destruction. Both were relatively untouched.

The Uptown Library quickly reopened as a quiet, safe place for local residents.

“We have so many homeless in the area,” Brattin said. “We had a van from Illinois show up with big bags of food. We had water bottles to distribute. We had more than we ever thought we’d be able to give out.”

The recovery effort has been compounded by a national public health crisis. The library offers resources such as computers and Internet access along with assistance for job applications and unemployment claims.

“What surprised us the most is how connected people are to our computers,” Brattin said. “People have no place to plug in their phones. They have no data plans. The (Kenosha County) Job Center was still closed. We were the ones that were able to fill that gap. That’s why we’re here.”

The Simmons and Uptown libraries are operating in full capacity.

Kenosha Public Library is under consideration for the National Medal for Museum and Library Service, the nation’s highest honor for institutions making significant and exceptional contributions to their communities.

“It’s all kind of bittersweet,” Brattin said. “Typically, what happens with these awards is a response to a significant challenge. We know how desperately important library services are to a lot of people. When people needed us the most, we were there for them.”