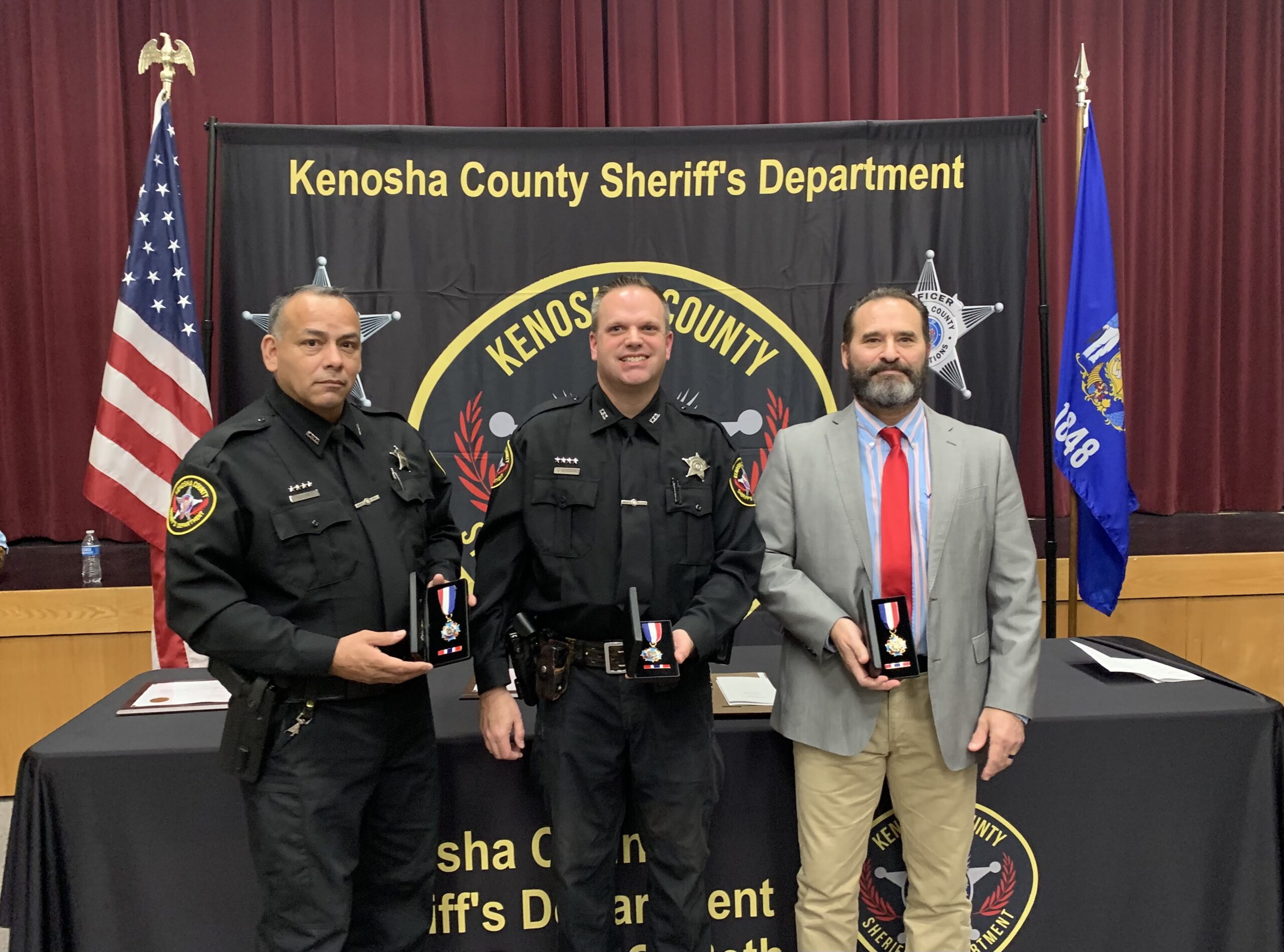 ‘We just do our job’: Sheriff’s deputies, Kenosha Police officer among those recognized at Sheriff’s Department Ceremony

Trio saved man from drowning in Lake Michigan in 2020

BRISTOL — A man was in the frigid and choppy waters of Lake Michigan, unresponsive.

Kenosha Police Officer Paul Chase, now retired, was already on the scene at the Small Boat Harbor on Harbor Drive, trying to locate him.

Two Kenosha County Sheriff’s Department deputies were on the way.

Deputies Joseph Geissman and David Gomez heard about it on the scanner and raced to the scene, not waiting for the call from dispatch — Geissman leaving behind some paperwork, and Gomez leaving from his security post at the Kenosha County Courthouse.

They wanted to help. The three ended up saving the man’s life. Geissman and Chase pulled the man from the water, and began CPR. Gomez soon joined them. Continuing chest compressions, they got a pulse, just as the Kenosha Fire Department arrived.

“The whole thing probably took, from the start to finish, 10 minutes at the most,” Geissman said.

On Thursday (Dec. 16), Sheriff’s Department leaders memorialized those 10 minutes from October 29, 2020, with Lifesaving Awards at the department’s annual Awards and Promotions ceremony at the Kenosha County Center. In all, five Lifesaving, Purple Heart or Silver Star awards were handed out, honoring those who saved lives or were injured in the line of duty. Thirteen Sheriff’s personnel were also formally recognized for promotions at the event.

All of the lifesaving awards were compelling.

The man on that October day was working for a marine company, and he fell in as he was trying to board a boat at one of the slips. Another man jumped in to try and save him, and both were in the water when Chase arrived.

“When we first got there, there was a little bit of a communications problem trying to find where he was at,” Chase said.

He soon found him as Geissman arrived, knowing that minutes matter in cases like this.

“I just started going,” Geissman said. “I got there and Paul was holding him up. He had been in the water for some time. He was half in and half out (of the water).”

Chase and Geissman pulled the man from the water to the dock. It wasn’t easy.

The man, lifeless, had layers of wet, heavy clothes on. The wind was whipping — Geissman remembers it feeling like a “wind tunnel.” The man’s co-worker tried to help from the water.

Gomez joined in the CPR effort when he arrived.

“We felt for a pulse, and there was absolutely nothing there,” Geissman said. “Probably about the first cycle in, we ended up getting one. A couple minutes later, KFD was there, and you just get out of the way.”

So they did. And you reflect later.

“It’s getting the guy out of the water — that’s all I’m focused on,” Chase said. “It’s all of us coming together. It’s not just one person. It’s a big team effort.”

Added Gomez: “We go into that mode where it’s lifesaving. We just do our job. That’s what we do. We worry about things later. We deal with it later.”

“We just get to work,” Geissman said.

What made it more special for the trio was they got to know the end of the story. The man, a father, survived, and his wife later reached out to keep them updated on his condition.

“She had a lot of complimentary things to say to us privately,” Geissman said.

That story became public on Thursday.

Kenosha County Sheriff David Beth credited the “shining stars” of his department and others in his remarks — people like the trio of lifesavers from that day in 2020.

“Most of these situations the average person runs away from. But our staff, and law enforcement in general, they run to it. They run to help others. They risk their lives. Fear doesn’t even cross their minds at the moment.”

Here is the complete list of those recognized on Thursday: