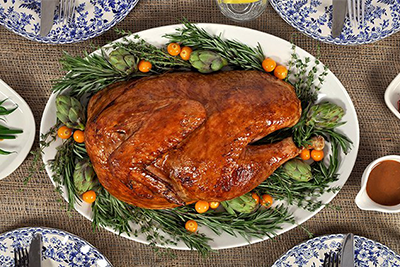 A Thanksgiving Feast for Two

Recipes, tips for cooking during a pandemic

Since this is the first (and hopefully last) COVID-19 Thanksgiving, I thought I’d offer a few tips on cooking for a smaller-than-normal Thanksgiving crowd.

This is easy for me, since most years, I’m cooking Thanksgiving for two (three, if you include our late beagle, Dickens Marovich).

The most popular-sized turkey is 12 to 14 pounds, which all of you are probably familiar with. If you’re cooking for a dozen people, that size is fine, but for two to four people, that’s a lot of leftovers.

Look for a 10-pound bird, if you can find one. I order mine, typically Norbest, from Hometown Meats, 4924 60th St., and always ask for a small one.

I also usually ask those same friendly folks to put the turkey on the meat saw and split it down the middle. There’s two good reasons for doing this.

First, you now have a five-pound turkey instead of a 10-pounder, and you can cook a five-pound bird in less than 2 1/2 hours, including resting time. You do let your turkey rest after it comes out the oven, don’t you?

The second advantage of sawing your turkey in half is that now you can have hot Thanksgiving turkey twice. We usually go with Thursday and Sunday.

Looking for a smaller alternative to turkey? How about a duck? I love duck, and my favorite brand is Maple Leaf Farms from Leesburg, Ind.

Maple Leaf Farms ducks are available at most Kenosha groceries for $15 to $20. Ducks average five to seven pounds, and you won’t find one for less than three dollars per pound.

They come frozen, so plan on at least four days to thaw out in the refrigerator. You might be able to feed four people on one duck, but you’ll be sorry you didn’t get a half for yourself.

From my deep background in the restaurant business, here’s the best way to roast a duck.

After it thaws and a day or two before Thanksgiving, hack off the wings and trim off any excess fat. Save the wings and the neck bone and make a quick stock. Strained and reduced duck jus, as the French call it, is great drizzled over the cooked meat when you serve it.

Season the duck lightly, inside and out with kosher salt and black pepper and roast at 350 degrees for 75 to 90 minutes. Like any poultry, the juices should run clear and the leg bones should move easily. Save the duck fat or give it to me.

After the duck cools completely, cut it in half lengthwise and gently remove the rib bones with your fingers. Now, you have a mostly-boneless duck, just like you get in supper clubs.

On Thanksgiving, simply reheat at 350 degrees until it’s hot and the skin sizzles a little bit and gets crisp. I like duck with braised red cabbage/bacon/apples out of “The Joy of Cooking” along with speatzle and several Pilsner Urquels. It reminds me of Czechoslovakia, even though I’ve never been there.

If you really want to simplify things, there’s absolutely nothing wrong with a perfectly-roast chicken. There’s an old truism that the only thing that chefs want to eat on their infrequent days off is roast chicken. I’m guilty–I could eat roast chicken every day. Here’s a recipe with three ingredients, including salt and pepper:

With an ingredient list just four items long (chicken, olive oil, salt, pepper), the genius of this bare-bones roast chicken is in its technique. To make it, thoroughly preheat a cast-iron skillet before sliding onto it a seasoned bird, breast side up. In under an hour you’ll get a stunner of a chicken, with moist, tender white meat, crisp, salty chicken skin, and juicy dark meat all done to a turn. If you don’t already have a cast-iron skillet large enough to hold a whole chicken, this recipe is a good enough reason to invest in one.

For sides, my best piece of advice for a smaller crowd is to cut recipes in half. Read over your favorite recipes first and see if the original amounts are conducive to just cutting in half. They usually are, and with things like stuffing, exact amounts are not all that important.

Here’s a few tried and true Thanksgiving recipes of mine. I didn’t include a recipe for roasting a turkey. If you don’t know how by now, you might be in serious trouble next Thursday (Nov. 26).

Allow 48 hours for this. It’s my go-to dry turkey brine. Enough for an 18-pound bird.

Buttered Stuffing with Celery and Leeks

Like any stuffing recipe, feel free to improvise. I often add things like leftover cornbread, sausage, apples or dried fruit. Stuffing is a very personal thing — use your imagination. Those of you who love stuffing know that it might be the only reason to host Thanksgiving. This version is an updated classic — no dried fruit, no surprise ingredients, no “twists” — just a very buttery, deeply savory stuffing made with garlic, leeks and a lot of celery. The bread is crusty and torn, never cubed (for those crisp, craggy edges) and the whole thing is baked in a baking dish, never inside the turkey (to keep it light and fluffy with a custardy interior and a golden-brown top). All stuffing needs two trips to the oven: Once, covered, to cook it through and twice, uncovered, to crisp up the top. You can do the first bake ahead of time if you like, or do one after the other if the timing works out that way.

I really like Anthony Bourdain’s no-cook cranberry relish (link below), but for a more-traditional cooked cranberry sauce, the “Joy of Cooking” recipe is fine.

In a food processor, pulse the orange with the cranberries until very finely chopped. Scrape the mixture into a medium bowl and stir in the sugar. Cover and refrigerate. Serve chilled or at room temperature. The relish can be refrigerated for one week.

These silky mashed sweet potatoes are spiced with cloves, nutmeg and a little black pepper, brightened with lemon zest, and spiked with bourbon (or orange juice, if you’d prefer). Puréeing them in a food processor yields the smoothest, airiest texture, but for something a little more rustic, you could mash them by hand. Whichever you choose, these reheat well, either in a microwave or in a pot over low heat.

This recipe can be made up to 3 days in advance and stored in the refrigerator. Reheat just before serving, either in the microwave or in a pot on the stove over low heat.

Included because you’re supposed to include a vegetable recipe in a Thanksgiving article. This one’s easy, if you like brussel sprouts, which I do. Here’s a simple, foolproof way to prepare brussel sprouts: Toss with a little olive oil or bacon fat, salt and pepper and roast until tender inside and crisp outside. Finish with a little red-pepper flakes or a drizzle of balsamic vinegar, if you’d like. This recipe serves two, but it doubles or triples easily.

You bet, and you can’t go wrong with anything from Elsie Mae’s pie truck on Sixth Avenue and 51st Place (order ahead and I’ll see you there when I pick up my pumpkin pie).